Marygold were born in Verona in the autumn of 1994 on the ashes of Wildfire, a cover band specialized mainly in songs by the Marillion of the Fish period.
A good band’s feeling was immediately reached by playing Genesis and Marillion‘s covers. After a while, the embryo of  the song The wizard was born in a completely natural and unpremeditated way. The musical and human harmony in the group was so strong and dragging that spontaneously ideas for new songs began to take shape.

The first line up was:

Marygold were at a crossroads. Continue to play covers or try to create their own repertoire of original compositions? Finally the followed the second path and consequently begins a prolific period that will take to songs like Marygold, Crows on the Tree and Pain.

The compositions continued: in this period Tania stands… and Sunflowers were born and an incredible myriad of ideas that will be the roots of the future second album.

With this training they worked for live activity. It’s the Hara-kiri show period. A piece that marks a turning point in the group’s way of creating. With this new approach they tried to get out of their compositional schemes looking for a more essential, less cerebral, more direct sound.

At the beginning of 2003, Marygold started recording their first album by their own. At the conclusion of this long work, Marco Adami left the band due to personal commitments. Therefore he was replaced by Alberto Molesini, in art “Baro”, an artist with a long experience as a soloist.

The 2006 is the year of the release of the first CD, entitled “The Guns of Marygold“, which is welcomed by the specialized critics, both in Italy and abroad.

Finally, it was in 2007 that the group reached the crowning point of a dream: they opened the concert of the Balletto di Bronzo during the Verona ProgFest of the Club Il Giardino, event in which groups such as Osanna and Banco del Mutuo Soccorso participated in that edition.

After those memorable years, a long period of stagnation follows, due to transfers and work and family problems, which actually blocked live activity but slowly led to the composition of new pieces.

Marygold never gave up and consequently, at the end of 2015, the recordings of the second Cd began.

The new album, with the emblematic title “One Light Year” , scheduled to be released on October 12th 2017.

Finally, at the start of 2017, with the left of bassist Baro, Marco Adami returned and he stabilized the original line-up in 1996.

In conlcusion, after “a light year”, Marygold are ready to bring back to the scene all their passion, never exhausted, for Progressive Rock. 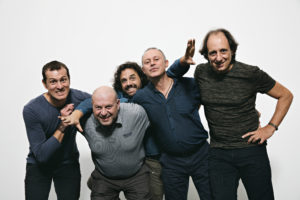